We meet again today in this Easter period to offer you an exclusive 2.51 update on Arkalys !

The Fleaster island is now available with the 2.51 update, and will be opened until 05/07. For the occasion, our Game Designer Lancivel created 2 exclusive ornaments ! These 2 ornaments will be available on all the island's monsters at a 1% drop rate alongside 2 new titles. Know that events will be organized by our Game Masters and Moderators to giveaway gifts ! (Use the "Amakna village" Zaap then go to [1,-4] to access the island)

Here's a preview of the Master Chocolatier 2019 : 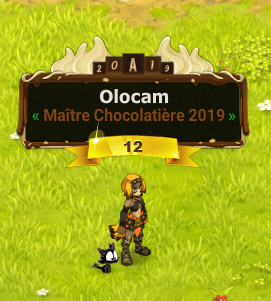 We've applied a general fix to better determine targets/trigger and order effect, which should lead to more fixes on player's and monster's spells.

We've modified the orbs drop system. Now, the amount of orbs dropped will be calculated according to the level of the monster you kill. For example, if a lvl 200 player kills a lvl 20 monster, a malus will be applied to his drop.

We're getting encouraging results, which is why we decided to reimplement achievements !

However we stay extremely vigilant on the possible latencies/bug that these big changes might introduce.

When all this is over, there will be a compensation : XP/VOTES/PURCHASES x2 during a given amount of time.

We hope these news are exciting and you'll like it. Know that the current lantencie are our n°1 priority, we know how it can ruin a player experience. Have fun on Arkalys !